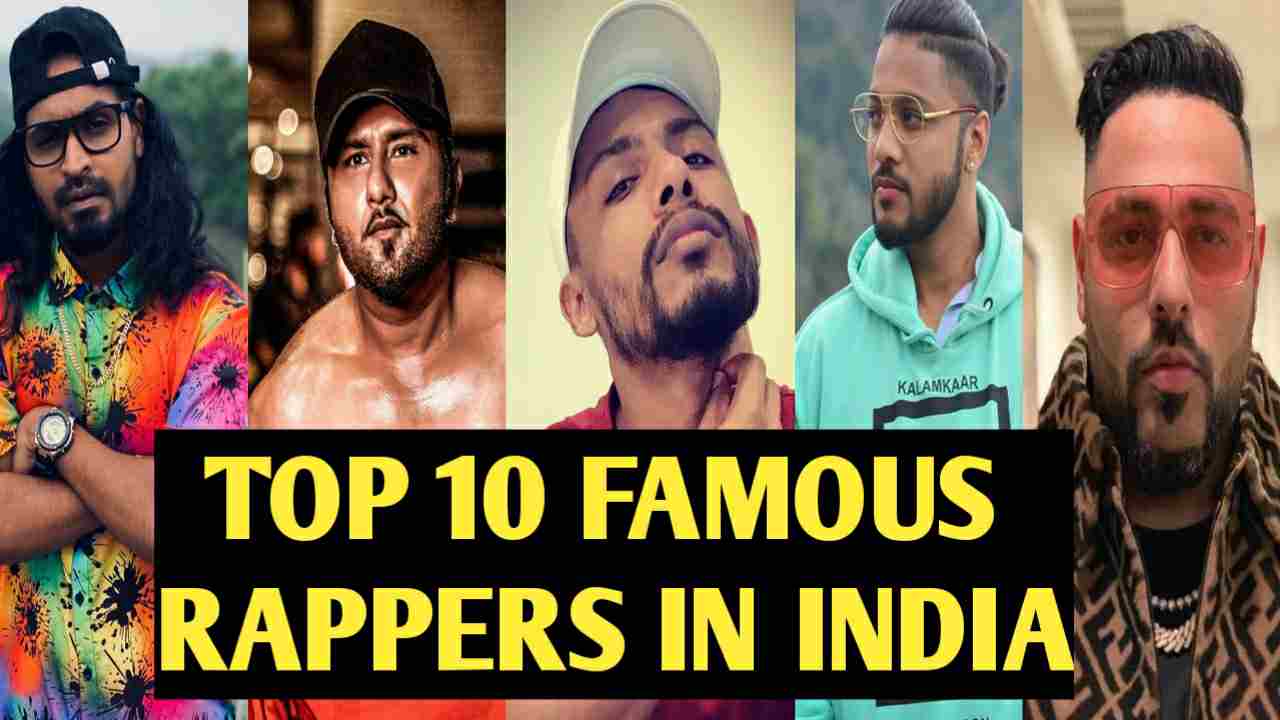 In the current time Rap Music is going viral in India . Rap music is being liked by the people of India.Rap music has become an important part of the music industry in India. Even in all the local languages of India like Hindi, Punjabi, Marathi etc. rap songs are being made. In which punjabi rap music are in top in industy after Hindi rap. There are some famous rappers in India like Badshah , Honey Singh , Ikka etc who’s rap song cross 200 million views on YouTube that is a large number. Now bollywood also including rap songs/music in her Movies. Here you get list of top 10 famous rapper in India  or most popular rappers in india.

In this article we are talking about most famous rappers in India who’s almost all songs archives million of views. That means you will get India famous rapper list.

I want to to inform that you this list is not based on talented rapper, Lyrics rapper it is based on views and fame of the rapper .

We will make another list for best talented rapper of India in which you see some underrated rappers names like EPR, MOB D, KR$NA etc. This list is Top 10 famous Indian rappers so lets start the List.

His song Nahi karni Job the first song that got viral. Naezy some best song is Gooda, Bahot Tez, Baap Se etc. So you can check out Fotty Seven on youtube and other streaming platform.

Arpan Kumar aka KING ROCCO is an artist who starts living in the hearts of people very quickly. His amazing flow and his relatable lyrics making him different from other rappers .

King journey starts rappping approx 2014 and time to time he learning music and making good quality music. In India’s first HIP-HOP reality show MTV HUSTLE SESSION 1 (2019) ,he was the first artist who selected in top 15 Rapper/hiphop artists in the MTV hustle and later he got place in top 5 artist with RCR, SHLOKA, M ZEE BELLA and EPR.

In MTV hustle king earned strong fanbase and his songs cross million views on YouTube. After that release some hit singles TUM SATH RAHNA and NO LOSS which got millions of views.

In July 2020 he drops his second album THE CARNIVAL which all songs cross million views on YouTube . King called his fans as KINGSCLAN .

So checkout King Rocco on youtube if you not listen his songs yet. Now move to the next rapper on our list ” popular rappers in India”

Mc Stan is a 20-year-old rapper from Pune. Emcee Stan song sounds different from another Indian rapper and he has his own fan base. Emcee Stan Song Khuja mat cross 20 million views on Youtube. His song Astafirrullah also crosses 7 million views on youtube. So you have to checkout to this rapper.

MC stan some best song is Aastafirullaah, khadve vichar and he also makes some distract Titled Khuja Mat and Wata. So you can check out MC Stan on Youtube and enjoy His songs.

Dino James is one o the best rapper in India. He is one of the best lyrical rappers in India. Dino James storytelling is amazing, his all song composition is way better than other rappers India. Almost all song of Dino James goes on the trending section in India.

His Youtube channel has more than 3 million subscribers. Please checkout Dino James on youtube he make quality music and he have zero haters in rap industary.

Shahrukh Seikh knows as Emiway is the rising star of India. He has an amazing flow and hardworking rapper in India. from 2 years Emiway all song goes in the youtube trending section so you can check his popularity in India.

He is doing so many international collaborations in the year 2020. Emiway fan following is very strong in India. Emiway rapping career boosted after the Raftaar vs Emiway beef. Emiway is first indian rapper who cross 10 million subscribers in india.

Emiway song Machaayenge and Firse Machayenge got more than 200 million views on Youtube which is a great achievement for Independent Rapper.

His song samajh me aaya kya also cross 100 million views on Youtube. Now there are 11 million-plus subscribers on his youtube channel. So tell be your favorite Emiway song in the comment section.

Divine is one of the popular rappers of India. He make always best quality rap song for his fans. Bollywood movie also inspire by Divine life story and his Career.

His song Mere Gully Me with Naezy is Featured in Gullyboy Movie. Divne also rap on Famous Indian web series Sacred Games Title track ” KAAM 25 ”. In current divine all song goes on youtube trending section and Divine have almost 1 million monthly listeners on music streaming platform Spotify. Which is great achievement for him.

In Divine rap songs, you can feel the vibe that makes him great. Divine first album “Kohinoor” liked by his fans and his second album coming soon. So please check out Divine song on music platforms.

Ikka Singh aka Ankit Singh is a rapper from Jamunapaar(Delhi) whos song you can listen everywhere underground to Bollywood. Ikka makes debut in Bollywood in approx 2014.

Before that, he is part of a crew Mafia Mundeer with Raftaar, Lilgolu, and Other rappers. But he left mafia mundeer because of his personal reason. Ikka makes both types of rap song commercial and hip-hop.

There are many songs of Ikka that are popular in India some of them are Dilbar, half window down, badri ki dulhalniya,Nindra , Mummy kasam .

His some best hiphop song are Sapne, shuruaat, Parichay, Interview, Hip to the hop, Me fan Bhagat singh.

Raftaar Aka Dilen Nair is popular rapper in India. He is one of the finest hiphop artists in India. He is from Kerala and living in delhi . He gote fame after his song Swag Mera Desi featuring Manj Music. He was also crew member of Honey Honey Singh crew Mafia Mundeer .

Ikka and lil Golu was best friend in his starting time of career. Now raftaar has huge fan following in India. He is also judge in MTV roadies and India’s first hiphop reality show MTV Hustle.

Baadhah is a rapper from Delhi whos song you find everywhere. From the past 5 to 6 years Baadshah in only one rapper who makes record not in only the rap music industry also in the Bollywood music industry.

Baadshah 2019 song “Paagal” crossed 74.8 million views on YouTube within 24 hours of releasing, he create the record for the most-viewed video in 24 hours (https://en.wikipedia.org/wiki/List_of_most-viewed_online_videos_in_the_first_24_hours) on YouTube. Which are great achievements for any Indian artist.

Now Baadshah has a huge fan following in India. Baadshah is now a hit machine of the music industry of India. His almost every song became a hit song in India and across the world. So Without Baadshah our list ” Most popular rapper in India was Incolpleted.

Baadshah makes two albums “Original never End (ONE)” and ” The Power of Dreams of a Kid “. Now Baadshah is on top of the Indian Rap Music Industry on Making hit song.

Harinder singh aka Honey Singh is a person who makes big changes in the Indian music industry. He introduced rap music to Bollywood and indian audience.

Honey is good music producer, lyricst and rapper also. He got fame in 2011 after he gives back to back hit to music idustary. Now he most famous rappers in India. Even all music listeners of India know Honey Singh. We can say that Honey sing Introduced rap music to India.